Virgil's Description of History: The Interpretation of Aeneid 6 (summary)

At the beginning of Book 6 (20ff.), we find a poetic technique called echphrasis. The episode involving Daedalus discussed here has much in common with the main themes of Book 6. However, the parallel in Book 1 (Aen.1.466-93), where the same technique is employed, provides another hint; Virgil seems to imply the very way in which he could describe history in a most proper way.

In this connection, we should first notice the invocation to the gods of the underworld (Aen.6.264-7). This is closely related to that in the Iliad (2.484ff.), where the poet draws a clear distinction between (A):the knowledge of the Muses and (B): that of mortals (the poet). (A) is firsthand and integral (cf.Il.2.485 pareste te iste te panta), while (B) is secondhand (cf.Il.2.486 kleos) and imperfect. However, the poet states his firm will to enumerate all (Il.2.493 propasas) with the assistance of the Muses. In fact, the following catalogue (2.494ff.) succeeds in giving an impression that the whole has been fully detailed. An elaborate selection holds the key of this.

The distinction between (A) and (B) is also noted in Aen.6.20ff., where the picture on the temple doors represents Daedalus' firsthand experience, while the poet, on his part, not only admits his own incomplete knowledge (cf.6.14 fama) but also suggests the possibility of describing the whole story (cf.6.33 omnia). A deliberate omission (i.e. Daedalus did not describe his son's death) paradoxically asserts the authenticy of the whole mythological episode.

The same pattern is apparently found in the description of Tartarus (6.548ff.), which is introduced as a story told by Sibylla who has once been there and expected to tell the truth (cf.6.100, 188-9). Aeneas knows nothing about it, and carefully listens to what Sibylla has experienced. Further, there are some significant expressions which remind us of the invocation in the Iliad (cf.Aen.6.560-1, 625-7).

The motif of describing the whole is repeatedly found at the end of this book (Aen.6.679ff.). There are not a few verbal evidences confirming this. However, we should also notice another important motif which is related to the tense of each episode. In the epilogue, Virgil predicts a great number of honorable deeds found in the history of Rome as if they were going to take place in the future, while to the eyes of the contemporary readers, each incident belongs to the past. A reader of this poem, though not present at the scene, is quite sure of each historical event, and feels as if he knows the entire history of Rome, just like Anchises, who is telling the fate of Rome (cf.6.683,759). It is also noteworthy that the action of Aeneas is shown to be preceded by episodes such as that involving Daedalus and Theseus, who usually appear only in myths. In other words, Virgil makes it possible for a reader to regard these mythical events as historical.

The relation to Book 1 might provides a new perspective. Before the description of Juno's temple, for instance, we read a conversation between Jupiter and Venus (1.223ff.), where Jupiter declares his eternal promise of the perpetual prosperity of Rome (1.257-8). This promise applies not only to Aeneas and his contemporaries but also to the present and future people of Rome. Next comes the ecphrasis presenting the Trojan War. At the sight of the picture, Aeneas shed tears (1.459) remembering his own past experiences. These tears authenticate the truth of the story presented in that section.

To sum up, Virgil, paying attention to the words found in the invocation to the Muses in the second Iliad, tries to recount the following:

(a)' the future of Aeneas ------- the conversation between Jupiter and Venus; the catalogue of the Heroes

(c)' the past, the present, and the future of the mythical heroes --description of Tartalus

Virgil's original viewpoint may lie in the fact that he predicts the past of the readers as the future in the poem: (a)'=(b). Moreover, Jupiter's promise in the first book refers to the future of Aeneas and the readers as well: (a)'=(b)'. As the outline above suggests, Virgil tries to describe the past, the present, and the future of "all" people including future generations, to whom the words of Jupiter, "imperium sine fine (1.279)", will also be applied. This poem, though confined to the story of Aeneas, includes all dimensions of human affairs. Book 6, thus interpreted, implies that the poet's intent was to describe the history of human kind, or a universal truth.

The Image of Gold in Classical Antiquity: The Theme of Golden Age in Lucretius and Virgil

The Image of Gold in Classical Antiquity:The Theme of Golden Age in Lucretius and Virgil Taro YAMASH ...

PREV
『農耕詩』における独創性の問題
NEXT
The 0riginality of Georgics: Interpretation of "Praise of the Country Life" (summary) 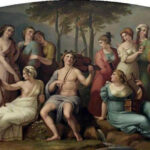 In pace leones, in bello cervi.