An Interpretation of Virgil's Aeneid 1.426

It is argued that 1.426 iura magistratusque legunt sanctumque senatum is incongruous in the middle of the account of the building-operations, and does not fit the structure pars...alii...alii. But this line is essential in making a symmetrical construction (i.e. a ring composition) as follows:

Having this in mind, I will try to argue the following:

(1) 426 has a parallel in 507, both of which contain the key word iura, one of the fundamental requirements to build a city (cf. 3.132ff.). It is also observed that the motif of iura plays an important role in connecting D with D’, in which both Aeneas and Dido are shown as leaders of justice.

(2) The picture of Juno's temple (446-493) deals with the motif of fama, a universal value that can be applicable to anyone and to any age. Aeneas, for instance, felt confident that he was safe even in a strange country when, in the picture, he saw his fama highly honored and saw full sympathy for his tragedy.

(3) The description of Dido’s Carthage (418-429), including line 426, is interpreted as an ecphrasis, where we find Virgil’s sense of history. The motifs of iura and fama have much in common with Virgil’s attitude when describing the past, present, and future of Rome.

(4) By implying the future Rome in the motif of iura, Virgil tries to suggest a paradigm for a just city in line 426.

THE UNITY OF TERENCE'S ADELPHOE

Virgil's Description of History: The Interpretation of Aeneid 6 (summary)

PREV
On the Noric plague of Virgil's Third Georgic (summary)
NEXT
京都大学広報誌 「寸言」（2007.3）所収：学びの山道を照らすもの――自由人の教育を求めて 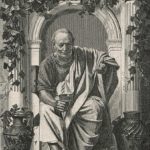